The larger than life couple are now copycats to what many American families do, they took out an mortgage loan and didn’t pay all cash to purchase their first Los Angeles home in the summer of 2017…

How Beyoncé and Jay-Z Could Use TILA 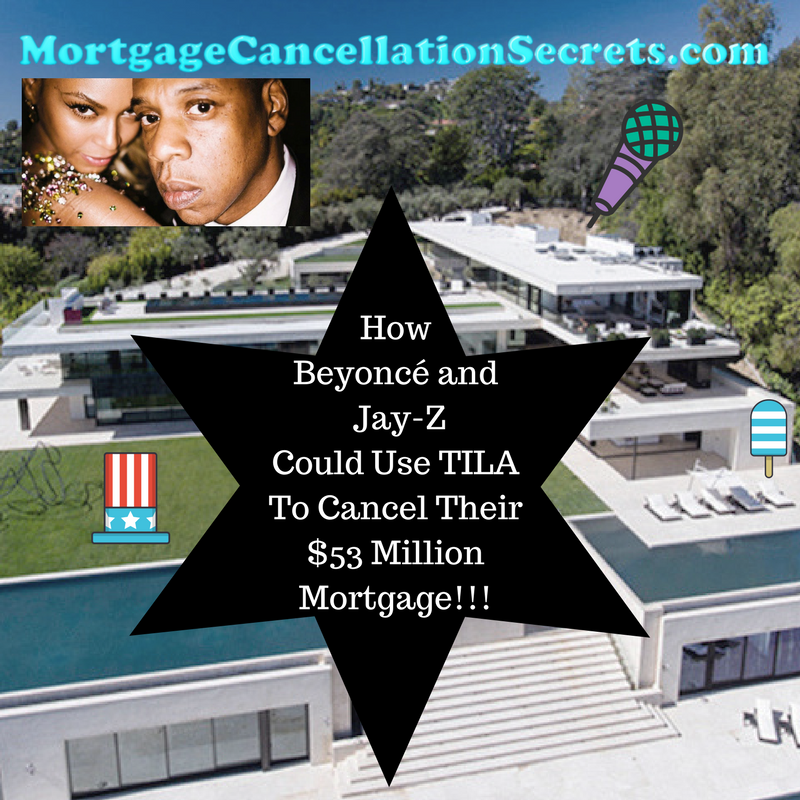 The Truth in Lending Act (TILA) of 1968 is United States federal law designed to promote the informed use of consumer credit, by requiring disclosures about its terms and cost to standardize the manner in which costs associated with borrowing are calculated and disclosed.

In April of 2017 previously media outlets were reporting the couple had paid around $90 million or as much as $120 million…now the world knows the truth.

The couple actually took on a mortgage loan for $52.8 million, which must be paid back.

Unlike most Americans, Jay and Bey were able to make a down-payment of  $35.2 million!!

Which is equivalent to bringing 40% all cash to the closing table.

Going the traditional route, if Jay and Bey opt for a conventional 30-year fixed rate loan their interest rate would be around 4 percent.

This would mean they would be making monthly mortgage payments somewhere around a whopping $250,000 a month.

If you were Jay and Bey, maybe opting for an interest-only loan which they did, just made more sense. Providing more flexibility to use the money to invest in other projects…Smart move!

In the public record, it shows that Jay and Bey purchased their Bel Air estate for $88 million. The mortgage loan is actually financed through two separate trusts and that they made a downpayment of $35.2 million (the 40% cash payment at the closing table). The power couple mortgage loan is a five-year adjustable rate mortgage with a 3.4 % initial rate. This will allow the rate to stay the same for the first five years. After that, the rate adjusts annually based on Libor. Which is the benchmark rate used by the world’s top banking institutions.

By putting 40% down, Jay and Bey have equity in their home. They are not upside down like many Americans. Plus Jay and Bey could also pay off this loan any time…Especially not like many American families, who are stuck in a mortgage they can’t afford to pay off maybe never. Which many average Americans carrying mortgages result in foreclosure.

However, the same as with many Americans both Jay and Bey may not know important secrets about their mortgage loan…In fact, the power couple could use these hidden secrets to cancel their entire remaining $53 million dollar mortgage loan forever….receive all their down payment back of $35.2 million, and plus all mortgage payments made!

The good news is that TILA was intended to protect average consumers… not just rich people and powerful celebrities!

Would you love to learn how-to Rescind and Cancel your mortgage loan permanently??

Today, the use of TILA Violations for fraud is an ironclad foreclosure defense. Creating an advantageous position for homeowners to workout a mortgage foreclosure conflict with their mortgage lender faster.